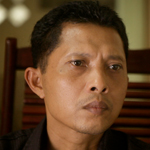 Director Joshua Oppenheimer’s followup is a companion piece that’s less surreal, more intimate, but similarly profound. He continues on the same topic, but instead of focusing on the perpetrators he goes back to his original idea of following one of the survivors. To me that sounds like it would lose the unique hang-out-in-the-living-room-of-evil, give-them-enough-rope-to-hang-themselves power of the first movie, but it ends up being just as impressive because of the amazing person they focus on. END_OF_DOCUMENT_TOKEN_TO_BE_REPLACED