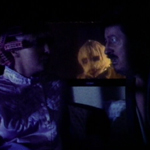 MOONSTALKER is, surprisingly, on DVD. But it’s an amateurish Jason-with-a-touch-of-Leatherface knockoff movie; any variations on the formula seem accidental. It’s one of those movies where the very first shot makes you realize you’re in for a chore. Actually it’s not a bad P.O.V. shot of a killer spying on some campers, but there are people dancing next to a fire and it is very clear that this is not how they dance. This is what some crew members do when the director says “go dance next to the fire” and there’s no music playing and they’re kinda embarrassed and trying to be sarcastic. END_OF_DOCUMENT_TOKEN_TO_BE_REPLACED