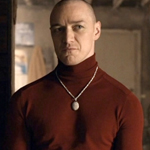 Request: please be extra careful in the comments not to give away that one surprise thing where people might see it by accident.

SPLIT is M. Night Shyamalan’s odd little thriller about three teenage girls abducted from a parking lot and kept locked in a room by a man calling himself Dennis (James McAvoy). Terror turns to confusion when he starts coming to the room talking different, acting different, claiming to be different people. It turns out Dennis is just one of 23 personalities in this guy, and they don’t all necessarily support what he’s doing.

Logically you assume this kidnapper is gonna be a rapist or killer, and these may be true, but for now he’s being told to cool it by “Patricia,” a female personality who shows up occasionally to make the girls mayo sandwiches and assure them “he’s not supposed to touch you.” Oh, okay, that’s comforting. He also shows up as “Hedwig,” an 11 year old boy who likes to dance and listen to Kanye West and giggles a little when he warns them that “The Beast” is coming.

I haven’t always been on board for McAvoy (WANTED, VICTOR FRANKENSTEIN, X-MEN FIRST CLASS), who’s obviously a good actor but seems weirdly prone to playing heroes who are a little too douchey to completely root for. But here he’s truly great. Each character has a different voice, accent and body language – you can recognize them even before he speaks, even if he doesn’t change his clothes. (Though he usually does. He seems to be very fast at it.) McAvoy is clearly having alot of fun with this, taking his acting skills and doing a bunch of donuts and wheelies and shit. Going off jumps.
END_OF_DOCUMENT_TOKEN_TO_BE_REPLACED