“Jason belongs in Hell. And I’m gonna see he gets there.” 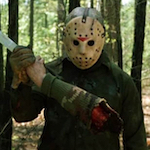 JASON LIVES: FRIDAY THE 13TH PART VI opens with some lightning, a full moon and fog rolling across Crystal Lake. And as Tommy Jarvis drives by with his institution buddy Hawes (Ron Palillo, SNAKE EATER) they scare away a dog who was in the street munching on some roadkill that I’m pretty sure used to be a rabbit. And you know my theory on that. Rabbits protect us from Jason. With rabbits being treated like this of course Jason is gonna fucking live.

(Note: Hawes is clutching Jason’s mask in his lap, for no reason I can ascertain other than the narrative requiring it to be returned to its original owner. Er, I mean, to its second owner, the one after Shelly but before Tommy. But remember, at the end of A NEW BEGINNING Tommy put the mask on and seemed to have  snapped. So I’m glad that he has, for whatever reason, forfeited custody of the thing. As crazed as he is now, he seems to be in a better place.)

This time Tommy has been recast with Thom Mathews (Freddy from RETURN OF THE LIVING DEAD), who frankly is much more appealing than the last version (sorry, John Shepherd – not necessarily your fault). This time he’s convinced if he digs up Jason’s grave and destroys the body he’ll stop having hallucinations about him. Hawes goes along for support even though he says he doesn’t “get the therapy here.”

The grave is a professionally made tombstone this time (here’s someone who researched how much that would’ve cost whoever sprung for it), which I think confirms my suspicion that the Corey Feldman scene from A NEW BEGINNING was a completely fictional dream and not a memory of something Tommy really witnessed. This time he finds the body thoroughly rotted, more worms and webs than man. He hears his young Corey Feldman voice killing Jason as he watches them wriggle around. END_OF_DOCUMENT_TOKEN_TO_BE_REPLACED