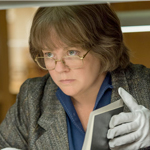 So it starts in desperation. She figures out she can get money by selling a nice letter that Katharine Hepburn sent to Lee to thank her for a profile she wrote. Next she swipes a Fannie Brice letter from a research archive and tries to sell that, but the content is bland, so nobody offers her much. In a fit of frustration or smart-assed boldness she pops the letter in her typewriter and adds a witty postscript. And sure enough when she tries to sell it that raises its value. END_OF_DOCUMENT_TOKEN_TO_BE_REPLACED