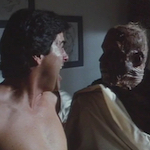 But it does not open promisingly. Some guy is making out with some woman in a train car. She strips down to her historical panties and giant boobs and they giggle and make out while the score by Ray Colcord (My Two Dads, AMITYVILLE DOLLHOUSE) erupts into erotic saxophone. The engineer (John Carl Buechler, director of FRIDAY THE 13TH: THE NEW BLOOD) comes in and yells at the guy to stop fornicating and do his job. He chooses instead to continue with the fornicating, and then the engineer jumps off the train right before it crashes head on with another train and then he yells into the sky like newly minted Darth Vader when he finds out Padme is dead. END_OF_DOCUMENT_TOKEN_TO_BE_REPLACED 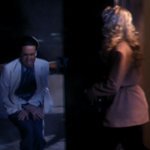 This is not the introduction of the bad guys, and the kid is not a brother or friend of Jackie (Lords) who needs to get avenged. It’s just a weird incident that she reports to as a crime scene photographer. END_OF_DOCUMENT_TOKEN_TO_BE_REPLACED