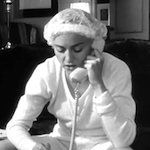 The Blond Ambition World Tour was not a normal concert – it was more like an extravagant stage musical. On the four month, 57-show tour from Chiba, Japan to Nice, France, Madonna promoted her 1989 album Like a Prayer and 1990 DICK TRACY tie-in I’m Breathless, backed by seven dancers, two backup singers, an eight-piece band and a $2 million, 80 x 70 foot stage set that was hauled in 18 trucks and set up by over 100 crew members. Every song we see in the movie has its own backdrop, wardrobe (by the fashion designer Jean-Paul Gaultier – or, as we know him, the guy who did the costumes for THE FIFTH ELEMENT – who Madonna recruited in 1989 by sending him a nice letter) and complex choreography. When the movie begins they already seem like old pros at performing it. If there’s drama about something going wrong it’s not any of them messing up. It’s the sound system or the weather. END_OF_DOCUMENT_TOKEN_TO_BE_REPLACED