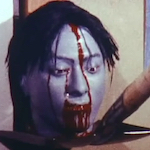 BLOODY MUSCLE BODY BUILDER IN HELL (1995) is a movie I watched partly because it was described as “the Japanese EVIL DEAD” and partly because it was called BLOODY MUSCLE BODY BUILDER FROM HELL. It’s a short, very low budget movie that does indeed pay tribute to the early works of Sam Raimi. I like seeing his influence reach across oceans and cultures like that.

In a prologue, a woman catches a guy named Naoto cheating and tries to stab him, so he kills her and buries her under the house. Years later, the house is rumored to be haunted. The man’s son Shinji, who is introduced lifting weights with a Muscle & Fitness magazine nearby, has inherited the house, and agrees to bring his ex-girlfriend Mika there, because she writes about hauntings for a living. They bring along an uptight psychic named Mizoguchi for his expertise (though Shinji thinks he’s full of shit). END_OF_DOCUMENT_TOKEN_TO_BE_REPLACED 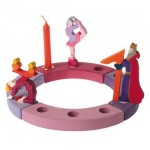 Okay, let me take a deep breath and explain this shit. You remember the movie THE RING, directed by Gore Verbinski, starring Naomi Watts. It was a remake of the japanese movie RINGU (or RING) directed by Hideo Nakata. (You may remember I reviewed THE RING on THE AIN’T IT COOL NEWS and also was the first motherfucker on the internet to reveal it was being made back when I reviewed RINGU and RINGU 2 for them.) The movie by Hideo Nakata came after a TV series and both were based on a novel. At the same time Nakata’s movie came out there was another movie called RING 2 or RASEN which means SPIRAL but is not to be confused with the Japanese horror movie UZUMAKI which is about spirals but is completely unrelated to rings. Well RING 2 is also not to be confused with RINGU 2 which is directed by Hideo Nakata. See, RINGU was a huge hit but RASEN (even though it was based on the sequel book) was not, so they pretended it never happened and made a new sequel. Soon after in Korea, they made a remake of the original RINGU, known here as THE RING VIRUS and I haven’t seen that one but I heard it has stuff that was ONLY in the movie version but also stuff only from the book. In the US Gore Verbinski made THE RING which is sort of the same story as the Japanese movie but now in seattle with horses and a girl named Samara instead of Sadako. That one now has a sequel coming out which is directed by, holy shit, Hideo Nakata himself, director of the original RING movie and the second attempt at the first RING movie sequel. So now he’s directing the sequel to the remake of his original, which is apparently a direct sequel to the remake, not a remake of either his original sequel or the sequel that was adapted from the book sequel that he did not direct and nobody liked. END_OF_DOCUMENT_TOKEN_TO_BE_REPLACED

Vern Steals A Look At THE RING Part I and II!! 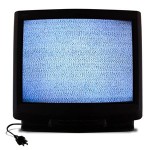 Hey, everyone. “Moriarty” here. One of my favorite critics on the web right now is Vern, a guy who tells it like it is at his website, Then Fuck You, Jack. He’s got eclectic tastes to say the least, and when he recommends something that’s off the beaten path, I’ve found it’s normally worth the effort to check out whatever he’s excited about. Let’s see what’s got him in a lather now.

Remember me, it’s Vern. One of if not THE most established web based ex-con Writers on the films of Cinema in the past 7-8 months.

Well boys today I have something important for you, ol’ Vern is gonna tell you about a movie series everybody in your clique will be talking about a ways down the line. While you guys have been running circles around the New Line Cinema trying to find out what’s going on with these hobbit movies you never even realized that it was all just a distraction from the REAL franchise New Line is trying to develop. Not LORD OF THE RINGS but just THE RING. END_OF_DOCUMENT_TOKEN_TO_BE_REPLACED