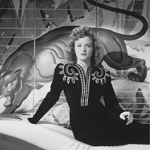 Irena Dubrovna (Simone Simon, THE DEVIL AND DANIEL WEBSTER) is the one possibly belonging to the titular race. She’s an immigrant from Serbia and a fashion illustrator. In her spare time she likes to go to the Central Park Zoo to paint the animals. One day she’s tossing one of her sketches in the trash and misses. Oliver Reed (not the actor [THE PIT AND THE PENDULUM] but a fictional character played by Kent Smith [BILLY JACK GOES TO WASHINGTON]) is the dipshit standing near the garbage who gives her shit about it. He strikes up a conversation, they have tea, next thing you know they’re married. END_OF_DOCUMENT_TOKEN_TO_BE_REPLACED