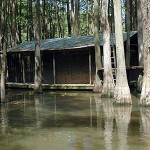 Boris Karloff from the Frankenstein gets top billing but let’s be honest here, he’s playing a mute butler for christ’s sake. This is not a starring role it is strictly a gimp role in my opinion. I mean I know for a fact the man can talk, and can talk well. But you wouldn’t know it the way he’s typecasted in some of these pictures. Here he’s just a big oafish brute who gets drunk and tries to grab the pretty ladies. He looks like they left the Frankenstein makeup on him and pasted a beard over it the poor bastard. END_OF_DOCUMENT_TOKEN_TO_BE_REPLACED