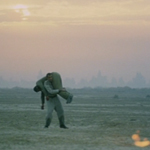 It’s too bad, I thought, that there’s not much of a film industry in Iraq, because that would be a great way for us to see the war and its effects through their eyes. Well, it turns out that a couple such movies do exist. One of them is AHLAAM (2004), based on a true story about the people in a psychiatric hospital in Baghdad during the 2003 “shock and awe” bombing a few days before the fall of Saddam Hussein.
END_OF_DOCUMENT_TOKEN_TO_BE_REPLACED