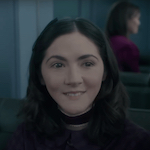 I probly didn’t need that spoiler warning. By now anybody who knows what ORPHAN is knows that wild plot twist: the adopted little girl who’s been terrorizing Vera Farmiga and making everybody think she’s crazy and abusive turns out to be a woman in her 30s with a rare hormonal disorder and a false identity. What makes this prequel so unlikely and so delightfully audacious is that Fuhrman originally played the character when she was around 12, and instead of recasting they brought her back at the age of 24, using Hobbitvision (forced perspective and body doubles) to make her look small. I honestly found it easy to forget, but just knowing they went through the trouble for this movie gives it an extra kick. END_OF_DOCUMENT_TOKEN_TO_BE_REPLACED