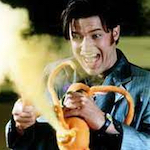 After work I went to Pacific Place to see this movie MONKEYBONE. All the advertising looked cheesy, but I was hoping it might be interesting because it was from Henry Selick, the director of THE NIGHTMARE BEFORE CHRISTMAS. Unfortunately the advertising was pretty accurate. I remember a couple times during the movie something playing on a bordering screen made a loud rumble that vibrated the whole row I was sitting in. I thought about the three escalators I took up through the mall to get to the theater, and the fourth escalator inside the theater that goes up to the floor where this one was showing, and I thought, “That’s an aftershock, and the building is gonna collapse, and I’m gonna die watching fucking MONKEYBONE.” END_OF_DOCUMENT_TOKEN_TO_BE_REPLACED