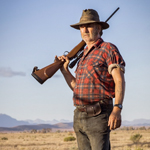 Mclean’s followup was ROGUE, a really good giant croc movie somewhat buried in the U.S. when it came straight to video from Dimension Extreme. But then financing problems, the death of a close collaborator and who knows what else kept slowing down the return to the giant crater where a guy stalks people. So I’m happy to report that even with all that anticipation this is a very good sequel. It’s a smart escalation, more action packed, faster paced, cleverly structured. The only big repeated error is another “That’s it, huh?” ending. END_OF_DOCUMENT_TOKEN_TO_BE_REPLACED 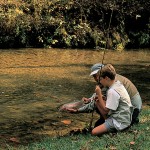 First off, I gotta address a couple points. Number one, regarding the reputation of this movie. I think it’s getting a bad rap. One Seattle critic wrote about walking out instead of reviewing it. Another one (“shout out” to Andrew Wright as the kids would say) mentioned the other critic walking out and said he didn’t blame her (his review was “a recommendation, I guess”). Roger Ebert gave WOLF CREEK zero stars and pretty much condemned it as a failure for the human race. Even some of the horror fans who liked it are talking about it like it peeled off their skin and made them eat it and despite the unpleasantness of the whole ordeal they begrudgingly had to admit that it did a good job of forcing them to eat it. END_OF_DOCUMENT_TOKEN_TO_BE_REPLACED