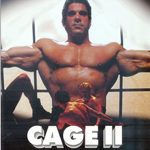 In 1994 Elliott returned with a sequel, so far his final directorial work. CAGE II (subtitled THE ARENA OF DEATH on the VHS packaging) reintroduces Billy and Scott while they’re out grocery shopping. Their negotiations about whether or not Billy is allowed to buy a blue soft drink are intercut with ominous shots of a gang of long haired bad guys in sunglasses and black trenchcoats walking toward the store. And it lays it on thick how much innocence this evil is about to collide with. Billy and Scott smile at a little boy. Two women invite Scott to a party. Before that, while they’re giving him the eye, two smiling children skip by, holding hands! END_OF_DOCUMENT_TOKEN_TO_BE_REPLACED 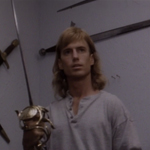 The hero is a disgraced fencing champion. Given a choice of weapons, he picks some kind of 17th century musketeer deal to go up against knights and samurai and shit. And some of the score by Jeff Beal (IN THE REALMS OF THE UNREAL, BLACKFISH, WEINER, HE WAS A QUIET MAN) would work for a Roger Corman sword and sorcery movie. END_OF_DOCUMENT_TOKEN_TO_BE_REPLACED