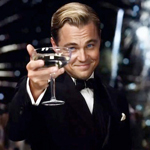 THE GREAT GATSBY is the story of this rich guy that’s in love with a gal that’s already married. It turns out he only got rich to try to impress her ’cause when he first fell in love with her 5 years ago she found out he was, as he says, penniless, and married this other asshole, etc. Leonardo DiCaprio (THE QUICK AND THE DEAD) plays the rich guy, Gatsby, Carey Mulligan (DRIVE) plays his love interest Daisy Buchanan, and Joel Edgerton (ANIMAL KINGDOM) plays her husband Tommy. But the main character is actually Tobey Maguire as whatsisdick, Daisy’s weiner of a cousin. END_OF_DOCUMENT_TOKEN_TO_BE_REPLACED