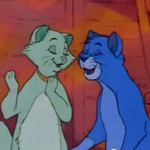 For a second I was thinking I’d already seen this, it was so familiar, but then I realized I was thinking of GARFIELD: A TALE OF TWO KITTIES, which had almost the same plot. But great minds think alike, you know. END_OF_DOCUMENT_TOKEN_TO_BE_REPLACED