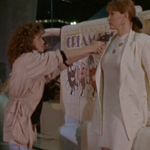 ANGEL III: THE FINAL CHAPTER, the third and last of the four ANGEL movies, finds Molly “Angel” Stewart far from her roots. She is no longer played by Donna Wilkes or Betsy Russell, now she’s played by Mitzi Kapture (Silk Stalkings, Baywatch, The Young & the Restless). She’s not a prostitute or a lawyer or runner anymore, now she’s a photographer helping out the police (we see her go along on a gambling bust to take pictures of people running away) and in her spare time trying to work on a photography book about street kids. Most drastic of all she doesn’t live in Hollywood anymore, she lives in New York. END_OF_DOCUMENT_TOKEN_TO_BE_REPLACED