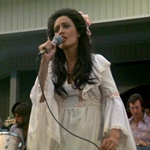 The characters are mostly people hovering around Nashville’s famous music industry (circa 1975). There’s an old country legend (Henry Gibson), a white gospel singer (Lily Tomlin), a black country singer (Timmy Brown), some rock n roll guys, some managers and associates and what not. And they’re all kinda buzzing around the same events: a ceremony for returning soldiers at the airport, a traffic jam on the way home, an outdoor concert, a fundraiser, a concert for an independent presidential candidate whose platform we hear blaring out of speakers all throughout the movie but whose face we never see. END_OF_DOCUMENT_TOKEN_TO_BE_REPLACED