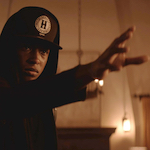 Like SWEETHEART, it trusts us to have the patience to watch what he does for a while instead of giving us all the information up front. We see that he works as a street magician – a really good one. He does David Blaine style card tricks that blow the minds of the various young people he approaches on Hollywood streets. And he has a few weirder tricks where he seems to make objects move – like, causing someone’s ring to float and spin above his hand, moving his other hand around it to show that there are no strings involved. He does that one for Holly (Seychelle Gabriel, THE LAST AIRBENDER, BLOOD FEST) who is clearly into him, and maybe would be giving him the same look if the trick wasn’t so astounding. He gets her number and starts having awkward dates with her. END_OF_DOCUMENT_TOKEN_TO_BE_REPLACED