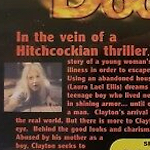 It was released as part of First Rites, which was an imprint from Hollywood Video (the biggest American video store chain besides Blockbuster) for low budget independent movies from new directors. Showcasing new voices or whatever. It fascinates me because it doesn’t seem to me like they would earn any more money from having THE MAN NEXT DOOR available than just having more copies of CON AIR or whatever. With some research I learned that it was someone else’s deal that partnered with Hollywood in the U.S. and Rogers in Canada, but still, there must’ve been someone within the shitty corporate structure of Hollywood Video that really believed in this mission and convinced someone to get behind it. That’s pretty cool. END_OF_DOCUMENT_TOKEN_TO_BE_REPLACED