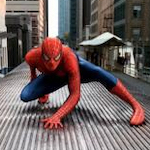 Which does not seem to be working out great so far. The painting of Mary Jane dissolves into a closeup of her face on a perfume billboard that Peter has to walk under every day, reminding him of his pain. Though he tries to hide it, it’s clear his world crumbles when she is not near. He’s in college now, and living on his own in a small apartment. Much like part 1’s opening about all the ways Peter can be humiliated on the way to school, this one piles it on real thick about what a shit sandwich life still hands to him every day. END_OF_DOCUMENT_TOKEN_TO_BE_REPLACED