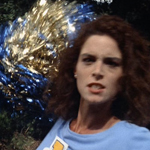 It’s kind of an A-Team of B-actresses. Betsy Russell (AVENGING ANGEL) plays Alison, sort of the protagonist and probable Final Girl because she keeps having symbolic nightmares about death and cheerleading, including ones where she gets slashed by razor sharp pom poms, and one where she joins the squad in cheering her boyfriend Brent (disco star Leif Garrett) as he has sex with Teri Weigel (MARKED FOR DEATH, PREDATOR 2, lots of porn). And then you have Lorie Griffin (TEEN WOLF), Rebecca Ferratti (GOR, GOR II, CYBORG 3, HARD VICE), and most importantly Lucinda Dickey (NINJA III: THE DOMINATION) plays Cory, the team mascot. She doesn’t really fit in and the bitchy camp director Miss Tipton (Vickie Benson, doing a broad Troma or John Waters type acting style like she’s in a different movie than the others) has it in for her, forcing her to wear her alligator mask while she eats.
END_OF_DOCUMENT_TOKEN_TO_BE_REPLACED