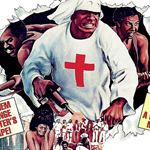 When we first meet them they’re driving around in a school bus like hippies, getting drunk off their asses. They get into a conflict with a guy at the gas station who’s clearly a racist piece of shit. I gotta side with them while also admitting that they started it. END_OF_DOCUMENT_TOKEN_TO_BE_REPLACED