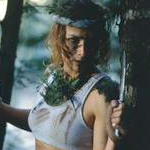 It follows alot of the usual sequel standards: cheesier and more TV-movie than the first one, rehashed plot, ante upped. Well, they up the ante by having three women instead of one: Maria (Raquel Bianca), Sharon (Debbie Rochon) and Ingrid (Donna Jason). This time you get to know them a little bit before Vern jumps out of the bushes. They’re old friends on a trip together, they don’t like the idea of hunting, they’re rude to the locals, one of them is in the middle of a bad breakup, another one seems like maybe she’s gonna make a move on that one, etc. They camp out in a tent together, drink and are real loud and obnoxious even though they know they’re bothering a nerdy park ranger guy nearby (they don’t know that he’s thinking about them and jerking off, though). END_OF_DOCUMENT_TOKEN_TO_BE_REPLACED 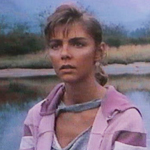 Renee (Roberta Weiss, THE DEAD ZONE) is a lady in pink Nike sweats out for a jog on a hiking trail somewhere (it was filmed in or around Vancouver) when suddenly she gets jumped by a crazy shades-wearing mountain man named Vern (Lawrence King-Phillips, ROLLING VENGEANCE), who ties a rope around her neck like a leash and makes her come with him. The cover says it’s based on a true story so I want to make perfectly clear that they better not be saying it’s based on me. I never abducted nobody. I’ll sue. END_OF_DOCUMENT_TOKEN_TO_BE_REPLACED