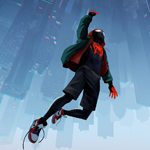 So much has been done in computer animation since TOY STORY. There have been many great achievements in the form, including two funny super hero movies in the INCREDIBLES series. But the kineticism and print-inspired graphic playfulness of SPIDER-VERSE feels completely new. The Spider-men-and-women run and flip and swing and glide in exaggerated splash page poses true to the history of cartooning but rarely possible in computer models. They’re (mostly) rendered in three dimensions, but with line art details and outlines and Zip-a-Tone dot shading. Some shots or characters are done in traditional hand drawn animation. Backgrounds sometimes have spray paint coloring in honor of the movie’s graffiti writer protagonist. Comic book description boxes, sound effects and motion lines – most importantly Spidey-Sense wiggle lines – appear on screen. The filmatism includes split screens, pseudo time lapse, jump cuts and hotshot flying camera moves that seem more at home in this cartoony animation than in the special effects movies where they have to pass for live action. END_OF_DOCUMENT_TOKEN_TO_BE_REPLACED