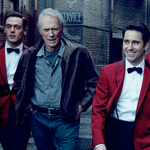 The rest of the time it’s them singing “Sherry” and “Can’t Take My Eyes Off Of You” and stuff, and these are good songs. So it’s not a problem. END_OF_DOCUMENT_TOKEN_TO_BE_REPLACED