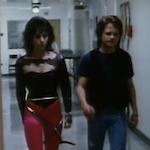 Some time around the mid-‘90s I took a weekly screenwriting class for a while, and the teacher loved Paul Schrader. He seemed to bring him up in every class. The guy who wrote TAXI DRIVER. The guy with the strict Calvinist upbringing. Eventually he had us watch a Paul Schrader movie, and he chose LIGHT OF DAY – the one where Michael J. Fox plays in a rock band with Joan Jett. I had seen it before and I didn’t dislike it but I thought it was a weird choice to represent Schrader. I think maybe the teacher hadn’t seen it yet.

But, you know, after THE CARD COUNTER last year and finally watching LIGHT SLEEPER this year I was kinda high on Schrader and thought it might be worth going back to this one to see if there was something I was missing. Well, no, not really, but that’s okay. It’s not in the vein of those ones I just mentioned and it’s not as powerful or as distinctly Paul Schrader, but I don’t think anybody else would’ve made exactly this rock ’n roll movie.

I used to think of it as corny because it’s a rock star acting and a sitcom star rocking, but what’s cool about it is that it’s thoroughly working class. It’s about a band, but it’s never about the record label guy is coming to the showcase and it’s their big chance and they write a hit and they get the cover of Rolling Stone but then it’s the pressures of fame or whatever. No, they’re just a small band that plays at a little tavern in Cleveland called the Euclid (“the Euc” for short) and they try to keep that gig or set up a small tour or play in a different band that will pay better. They do pull a pretty good crowd for the size of the place, but they’re not famous. Nobody knows who they are. And they gotta have jobs. END_OF_DOCUMENT_TOKEN_TO_BE_REPLACED