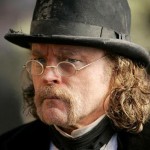 Now if you’re like me you remember the very end of BRIDE OF CHUCKY, suddenly a little sharp-toothed baby chucky pops out. It’s like the traditional sudden-jolt-ending used in every horror movie since CARRIE, but at the same time it’s a funny joke because you just KNOW it means we’re gonna get a SON OF CHUCKY some day. Or SEED OF CHUCKY it turns out due to the ambiguous gender of the baby. END_OF_DOCUMENT_TOKEN_TO_BE_REPLACED