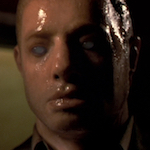 One thing we’ve learned from sci-fi and horror films is that monsters and weird things find ways to survive, to evolve, to adapt, to keep coming back. It was true in the case of the Judas Breed, a bug genetically engineered by Dr. Susan Tyler to be a sellout traitor that kills off the diseased roaches of the Manhattan sewers and then dies out, that instead managed to squirt out tens of thousands of generations in a couple years and evolve into a six foot termite-mantis that can mimic the shape of a human to survive on the streets. It was also the case with the MIMIC movie series itself. Guillermo Del Toro and the Miramax marketing department created an identifiable enough brand, the Weinsteins or somebody okayed a direct-to-video sequel, and with a third of the budget and no need to attract box office I suspect it was able to be hatched with less of their scrutiny and meddling. While MIMIC is an interesting movie that doesn’t entirely deliver as slick mainstream entertainment, its sequels are in a good position to exceed expectations. They’re better than you fear and different than you expect, thus fulfilling the potential of the DTV sequel format. END_OF_DOCUMENT_TOKEN_TO_BE_REPLACED