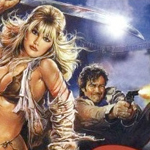 We begin mid-story with Yellow Hair’s buddy The Pecos Kid (Ken Roberson) in jail and with Colonel Torres (Luis Lorenzo) in possession of the fabled deer-horn-carved-into-a-wind-instrument that could help him find the legendary Aztec City of Gold. When the troops come after her tribe in their search for the gold she has personal reasons to find it for herself. END_OF_DOCUMENT_TOKEN_TO_BE_REPLACED