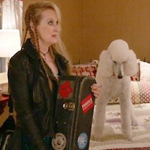 Ricki is a rare and precious thing, a lead role for an actress – an older actress, even – that gets to be complex and flawed and also funny (not to mention sing and play guitar!). She’s a strong personality and also a mess and possibly racist and hates Obama and also it turns out she knows how to be a good mother and friend. I mean, now she does, but where the hell was she before? Will this cause healing, or only increase resentment? Streep, not surprisingly, goes to town with the role and seems to be having a great time. END_OF_DOCUMENT_TOKEN_TO_BE_REPLACED