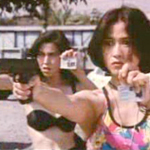 Although Jade is a cop who gets her man, she’s obviously hard to deal with, so the boss takes a getting-rid-of-Chris-Tucker-in-RUSH-HOUR type glee in sending her to Singapore to investigate an international arms dealing ring. And something about the American mafia and diamonds and a guy that was involved in the World Trade Center bombing. END_OF_DOCUMENT_TOKEN_TO_BE_REPLACED