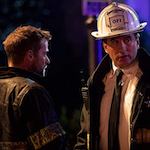 In fact there’s quite a bit of continuity: original screenwriter Gregory Widen (HIGHLANDER) returns, the lead character is meant to be the grown up son/grandson of Kurt Russell’s characters, William Baldwin returns as Brian McCaffrey (now assistant chief) and Donald Sutherland returns as crazy/fun pyromaniac Ronald Bartel. Also it’s supposed to be the same fire station, there are photos of Russell and Scott Glenn on the wall, the events of part 1 are discussed, and (in a real fuckin stretch) Brian uses the phrase “career dissipation light,” which was already a stretch when he repeated it back to a corrupt Alderman he heard using it 28 years ago. Are we really to believe he loved it so much he made it part of his lingo? END_OF_DOCUMENT_TOKEN_TO_BE_REPLACED