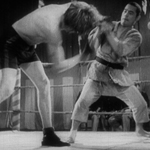 “I always imagined Sanshiro Sugata would look more fierce. You know, with a mustache or something.”

I don’t know if I’ve seen an earlier sequel than this, and it’s a pretty good one. It’s also the earliest example I know of the international fighting movie. IP MAN 2 also took this idea: the legendary martial artist is pressed into pitting his style and national pride against westerners. This part 2 has a better excuse though: it was made near the end of WWII at the behest of the government. I don’t give a shit though, I still like it. You lose, propagandaists.

It all starts with a conflict between a young Japanese rickshaw driver and his customer, an asshole white sailor (I think he’s supposed to be American, but his accent sounds otherwise). The sailor causes the driver to flip over and then blames him and wants to fight him.

Sanshiro happens to be walking by and he intervenes, grabs the sailor by the wrist. The sailor wants to fight and he keeps backing up until he gets to a dock and flips the guy off into the water. He’s worried that the driver will face repercussions so he tells him where he’s staying and to come see him if he needs help. The kid is in awe when he realizes who this is, says he read about him in the newspaper, winning the police tournament (to which Sanshiro hangs his head in shame). And the kid ends up coming to him to learn judo. 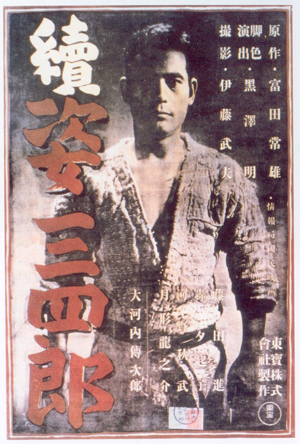 So already we’ve had a whole bunch of callbacks: he knocks the sailor off the dock like his master knocked his cohorts off the dock; a rickshaw driver comes to him to learn, just like he was a rickshaw driver when he came to his master; mention of the police tournament that was crucial in part 1. Soon we will also see some of the other characters from part 1 and hear a woman talk about the song children sing about not messing with him.

One question: did that sailor drown? They never show him coming out of the water. Anyway we learn that he was a boxer, and there’s another American sailor who’s supposed to be the best American boxer and because of this incident he wants to do a “a friendship match” against a Japanese fighter, to introduce the Japanese to American boxing. The promoter tries to get Sanshiro to do it, and he has to explain how the Americans fight (they wear special gloves and punch each other only in the upper body, and their faces get all ripped up and the crowd likes it best if one of them gets knocked unconscious). “There’s blood all over. You could even call it tragic. The Americans love it.”

Sanshiro thinks it sounds like barbaric savagery and an insult to judo and tells them to make like two eggs and a little bit of milk and some pepper on a lightly greased frying pan and scramble.

It pisses the guy off that he’d question him like that, especially when he realizes that this is Sanshiro Sugata talking to him. You know why I’m doing it, asshole? he explains (paraphrased). Because you made judo so popular that all us jujitsu guys were left in the dust. And I need to feed my fucking family you prick.

This is the best thing about this movie in my opinion. It’s about Sanshiro feeling empathy for the various fighters he’s defeated and ruined over his career. For example that asshole Higaki who he defeated in the field in the end of part 1? I know they said it was a duel to the death but that guy’s still alive, but sick and remorseful. He comes to Sanshiro and he learned his lesson, he doesn’t blame him anymore. He seems like a pretty good dude now. Poor guy. He warns Sanshiro that his two brothers went up and trained in the mountains and want to fight him. He tried to talk them out of it but they won’t listen. “Anyway,” Higaki says, “Please avoid any contact with either one of them. Just ignore them. I’m not telling you this for their sake. I’m telling you for your own good – or should I say for the good of Japanese martial arts.”

Then he has a coughing fit and Sanshiro rubs his back. Over this image of kindness between former enemies we hear the sound of the children singing the song about scary Sanshiro. As he explains to his student, even if you win all the time “You still face the sadness of life.”

There is less empathy for that poor lady he fell in love with in the first one. He left her behind and she still pines for him. The most time he spends with her in this movie is stopping by briefly to say he’s still gonna be gone for a while or possibly forever because he’s having a duel. She tries to be cool about it and asks if he’s gonna be gone for one year, or two years, or three years. Man, that lady puts up with alot. Don’t get me wrong, I like Sanshiro, but she needs to dump his neglectful ass. Find a guy who takes better care of his lady, and possibly his gi.

There’s a cute moment of cultural misunderstanding when he beats the boxer and he doesn’t understand why the ref is trying to raise his arm in victory, so he keeps pulling away from him.

The climax of the movie is great because it follows the formula of the first one but adds a new spin on it. Instead of dueling against Higaki’s jujitsu in a windy field it’s against Higaki’s snake of a brother’s karate in the snow. You can tell it was filmed in real snow with real bare feet. They circle around each other and do some moves and then he throws the guy and he slides down a snowy hill.

But instead of that being the end it cuts to the shack where the karate man and his crazy brother (who looks like a bushy-haired ghost and carries bamboo leaves around with him like a security blanket) live. Sanshiro is there with them making hot soup and trying to nurse them back to health. They refuse to eat and they just sit there and pout about losing like a couple of fuckin babies. In fact the brother comes very close to hatcheting Sanshiro while he’s asleep. But he sees him smiling and he stops and turns around and cries.

Just like young Sanshiro in part 1 impressed his school by staying all night in the cold lake, he wins over the karate brothers by spending all night looking after them. In the morning they’re willing to accept that they lost and that life goes on. It took all night but I think we have fight brotherhood!

Filmatistically I think the most impressive thing is Kurosawa’s use of dissolves on a static background. For example he has a shot of the dojo and the rickshaw student walks in and gets down on his knees, then he fades out and walks in and kneels again and then over and over, to show that he continues to train over time. 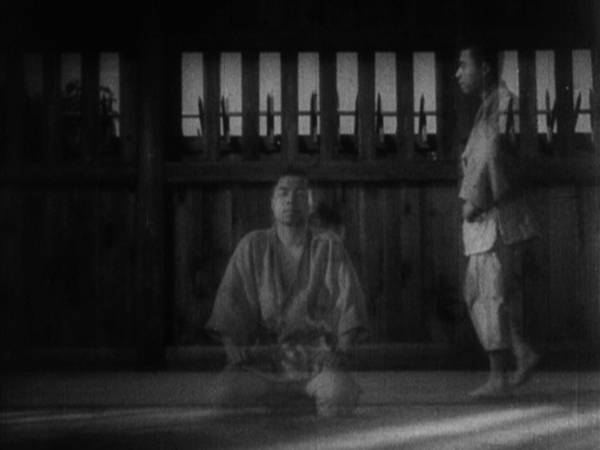 This may have been a cash-in and a government-pleaser for Kurosawa, but it’s a great movie full of many of the themes and traditions that still resonate in the best martial arts movies today. Or to put it another way, Sanshiro YOUGOTTA see this!

Akira Kurosawa
This entry was posted on Thursday, September 10th, 2015 at 12:03 pm and is filed under Action, Martial Arts, Reviews. You can follow any responses to this entry through the RSS 2.0 feed. You can skip to the end and leave a response. Pinging is currently not allowed.