SHUTTER ISLAND is alot like JURASSIC PARK. Outside experts are called in to a remote island where some unusual shit goes down. They’re shown the operation, the security setup, the layout. Then there’s a big ass storm so they can’t get off the island, the electric fences go down and the captives get loose and it’s bedlam. But it’s the criminally insane instead of dinosaurs, and it’s the guy who plays GANDHI instead of the director of GANDHI who’s their guide on the island. There are other minor differences, like for example this one is less about people staring in awe at dinosaurs and more about piecing together the traumatic events that haunt the hero, and figuring out how they tie into this mystery which unfolds in a surreal horror movie atmosphere and within the context of the 1950s, with the lingering horrors of WWII still in people’s minds as well as the fear of the hydrogen bomb and of communism, and most importantly during the psychiatric community’s bumpy transition from barbaric surgical methods to more modern psychotropic drugs and verbal forms of therapy. Otherwise though it’s pretty much the exact same movie, a blatant ripoff.

L.D. Caprio (THE QUICK AND THE DEAD) plays Teddy Daniels, a “duly appointed fedrull mahshall” who, with his brand new partner Mark Ruffalo

(looking strangely like Tony Danza in this one, I noticed) is here on the magical island of Shutter to investigate the disappearance of a patient. But also, it turns out, he’s looking for the arsonist who killed his wife, who he believes might also be in this institution somewhere.

Nothing quite fits, though. The authority figures seem menacing and they also might be drugging him. He starts having weird dreams where he’s visited by his dead wife (Michelle Williams, HALLOWEEN H20) or back at the liberation of Dachau. So you see the world through paranoid, scarred, possibly drugged eyes. Not as drugged as BRINGING OUT THE DEAD, but I was definitely reminded of that one at times. There’s a backwards smoking scene. 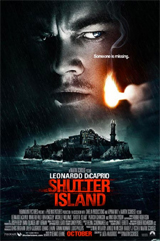 My favorite parts are where it gets extra weird. There are some really well done dreams where his visions of pretty Michelle Williams in a colorful summer dress seem to flit between flesh and ash, blood and water. Other times you don’t know if he’s hallucinating or just stumbling across some weirdness. There’s a scene involving rock climbing and a swarm of rats that just keeps getting stranger, started to remind me a little bit of Argento even thought it doesn’t reach that INFERNO level of insanity.  And I think at least in some cases there’s more logic to it than it seems at the time. At one point it seems for a second like there’s a portrait of Hitler in a doctor’s office. What? Oh, I see. This is a memory from WWII, it’s some nazi’s office. Nazis can get away with having Hitler posters in their offices, because they’re nazis, people expect that. Anyway, later you can see that the juxtaposition means something. It’s his mind piecing things together. Good editing trick by Thelma Schoonmaker.

The movie’s biggest strength is its atmosphere and looming sense of dread. It looks beautiful, and less naturalistic than most Scorsese. And the sound is a big part of it too. I kept wondering who did the score but I only saw Robbie Robertson of The Band credited as music supervisor. He must’ve done it RZA/Tarantino style from previously existing works. Looks like alot of John Cage pieces on there. The stuff they chose definitely has some echoes of CAPE FEAR and JAWS – those low tones growling at you like a bear in a cave.

It’s based on a book by Dennis Lehane. I haven’t read any of his books and wasn’t completely on board for the MYSTIC RIVER movie. But to me this was kind of the opposite of that one. See, in MYSTIC RIVER I was really enjoying it when it was a mystery, a riddle that hadn’t connected with its solution yet. Then when they explained what was going on it was just too fuckin ludicrous for me to square with all the interesting things that came before, and that just kind of fucked it up for me. With SHUTTER ISLAND it was an interesting mystery that I was anticipating having a come-down solution, turns out once it explains what’s going on it makes everything seem even more interesting.

SPOILERS THIS PARAGRAPH: I mean, I really like how it’s not just a sudden twist, it’s more like, “Okay, here is what’s going on. I know you don’t believe me, so let me lay out all the evidence and try to convince you that I’m straight up,” until you realize yeah, yeah, this is legit. Though even then you have to be prepared for a potential double-twist, a sucker twist. Also, isn’t it great that the scary authority figures really are good people, they really are trying to help him? And they genuinely are trying to avoid lobotomizing the poor dude, and in fact wouldn’t do it except that he purposely tricks them into it? It’s kind of a nice spin on the usual terrorized-by-mental-institution business.

The director is Martin Scorsese, the guy who did those movies with Robert Deniro. To be honest I wouldn’t say this was one of his best, but compared to your usual movie directing chumps you got going around these days it’s a fuckin masterwork. For example I liked it better than LAW ABIDING CITIZEN or SORORITY ROW. Of the other JURASSIC PARK movies I would say it is on par with parts 1 and 2 and definitely much better than part 3 even though that one did have pterodactyls. just my 2 cents.

Ben Kingsley Dennis Lehane Leonardo DiCaprio Mark Ruffalo Martin Scorsese
This entry was posted on Monday, February 22nd, 2010 at 3:51 am and is filed under Reviews, Thriller. You can follow any responses to this entry through the RSS 2.0 feed. You can skip to the end and leave a response. Pinging is currently not allowed.