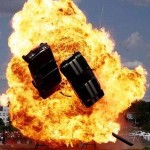 This is a 2004 documentary about two stunt women. One is a veteran, Jeannie Epper, double for Lynda Carter on WONDER WOMAN. The other is more of a newcomer, Zoe Bell, double for Xena the warrior princess. And of course now we know her for playing herself, Zoe Bell, stuntwoman, as the heroine of Tarantino’s DEATH PROOF. But this was before.

The movie splits between telling the stories of these two women. Jeannie is in the US, having a harder time getting jobs at her age, also involved in organizing younger stunt women and helping them out like a mom. (In fact, one stunt woman she helps is her daughter.) Meanwhile, Zoe is in New Zealand worried about her future because XENA is about to end.

Then – and I’m guessing this involves a breach of the documentarian code of honor, but oh well – Jeannie and Zoe meet. Zoe goes to the World Stunt Awards with Jeannie, almost gets groped by Gary Busey, goes to a workshop for learning how to fall from great heights, tries to get a new job. Jeannie helps her make headshots and gives her lots of tips. 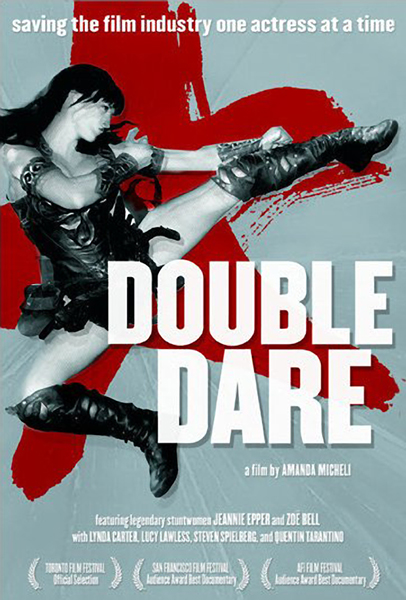 It’s cool that they chose to make this documentary about Zoe at this particular time, because during the filming she ended up getting the job of all jobs as stunt double for The Bride in KILL BILL. I guess it would’ve been an interesting story if they just followed her after XENA and she faded off into obscurity. It’s hard out here for a stunt girl. Instead they’re there when it all goes down. First you see a scout for KILL BILL checking out Zoe at the falling workshop. Then you see her audition in front of Yuen Woo Ping and Tarantino, she keeps doing flips off a trampoline but not sticking the landing. Later you hear the actual phone call when they told her she got the job. And her calling her parents and telling them. It’s all in the movie.

The documentary is pretty much Maysles-style, my favorite. You don’t ever hear a narrator or an interviewer asking questions, you just follow them in their lives. You see Zoe swinging around on cables, bouncing off trampolines, fighting with various weapons, being lit on fire and spun through the air, etc. But you also see her joking around with her family, crying when she has to leave them, buying a dress for the awards show. What makes her an interesting subject is the same two things that made her great in DEATH PROOF: 1) she is amazingly talented at this stunt shit (she is possibly Death Proof) 2) she is very charismatic, always laughing and smiling, never taking herself too seriously. So she seems like your nice buddy who happens to know how to do flips, swing swords, jump over cars and shit. (For some reason as Xena she has to get hit by a car – guess I missed that episode.)

This is not an exposee into sexism in the world of stunts, but they are able to handle that issue gracefully and subtly. There is some mention of sexism but they don’t really make a big deal about it. But then at a planning meeting for the stunt awards it’s brought up that maybe they should consider having separate awards for men and women, since that’s how they do acting awards for the Oscars and since women are not often given the same opportunities for stunts in scripts. I don’t know whether they should agree with that or not, but it’s telling how the men respond, clearly not even able to vaguely comprehend why this is even an issue. They get all mad and start talking about how they don’t want to reward “weenie stunts.” Nobody has to point it out, you can see what’s going on here.

Zoe talks about how great it is to be able to take off the Xena wig and just go home as Zoe, not having to worry about being famous. Which is funny considering DEATH PROOF, where she stars under her own name and profession, and the story even plays off her having moved to the U.S., like DEATH PROOF and DOUBLE DARE take place around the same time. Hell, I guess you could say this is a prequel to DEATH PROOF. Since G’HOUSE was such a failure moneywise maybe she can still walk around in public without getting hassled, but I recommend she not come anywhere near everybody I know, ’cause they loved that movie. This documentary makes her seem even cooler, you really want to see her star in some more movies. It’s pretty weird to watch her being Xena or the Bride and then realize wait a minute, that really is her doing all that shit. Like that classic shot in the House of Blues in KILL BILL, when the Bride runs right up the banister, jumps up and does an awesome kick. You see her doing that and you think shit, of course that’s not Uma. But I always believed it was. It’s kind of unnerving, splitting the Bride into two people. Next time I watch KILL BILL it might be weird.

If you dig KILL BILL like I do you’ll be happy to know that there is some behind-the-scenes scenes on that, and even more in the deleted scenes. There you find out that she had to wear a mold of Uma’s nose, since her own is very distinct and non-Uma.

Jeannie, it turns out, is also in KILL BILL – she plays the preacher’s wife in the chapel in volume 2. She has to get shot, so being a stuntwoman she knows what to do. But I’m betting there’s a different reason why Tarantino wanted her. Early in DOUBLE DARE there is a montage of some of the stunts she’s done. She was the double for Robocop’s partner, for example. But the one that really got me was this scene from COFFY. Coffy goes into this bar and kind of a white trash gal says some racist shit to her, and they get in a fight. That’s Jeannie. Not just doubling, she gets to play the character since it’s just that one scene. As soon as I realized that was her she was in my cool book. Wonder Woman – whatever. But if she fought Pam Grier she deserves respect.

The movie isn’t perfect. It would be nice if they explored some of it in more depth. For example, Zoe mentions that she just kind of fell into the business by accident after she got out of school, but they never explain what that means. Still, it’s a real interesting slice of life. I would recommend this to anyone who likes movies, but especially if you like KILL BILL and DEATH PROOF. When you see some of this stuff you’ll believe she really could take out Kurt Russell.

Zoe Bell
This entry was posted on Saturday, April 28th, 2007 at 11:50 pm and is filed under Documentary, Reviews. You can follow any responses to this entry through the RSS 2.0 feed. You can skip to the end and leave a response. Pinging is currently not allowed.