Vern Gives Up on Entertainment Weekly 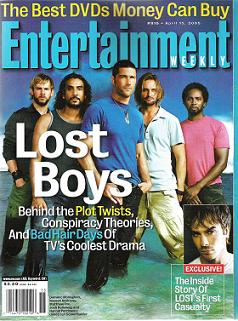 I’m gonna come right out and admit it: I used to have a subscription to Entertainment Weekly. Recently. It’s cheap, it comes every week, it keeps you company. Sometimes you read some tidbit in there that you didn’t catch on a web sight yet. They can actually interview directors and actors without having to go to a junket, so they got a leg up. Not too long ago Owen Glieberman said nice things about Under Siege 2: Dark Territory in his column, I liked that. Every once in a while they even hire actual writers to spend time on a feature article, I think they did one on the history of Police Academy one time. (I didn’t read it but that must’ve been interesting.)

But you know when a balloon has a tiny prick in it, and the air slowly, almost imperceptibly leaks out until the thing looks all lumpy and shriveled? That’s what reading EW does to my soul. A man can only abide by so many American Idol cover stories arriving in his personal mail box before he wants to leave the country and never come back. And I know, everybody says Lost is a good TV show, I’m sure I would enjoy it if I watched it. But for God’s sake would you sonofabitches PLEASE stop writing about it? How many god damn secrets could there possibly be for you to exclusively reveal? Even if it was my favorite show of all time I think I would feel like you guys were taking it too far. You talk about Lost more than the kids in Jesus Camp talk about the Lord. 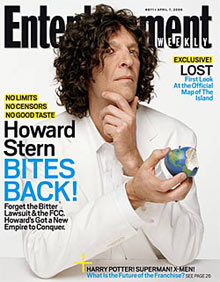 The killing blow took place a little while ago, I don’t know if you can remember this but there was a child star named Britney Spears who many years ago had a prefabricated music album that made alot of money for some corporation somewhere. Now she’s somewhat grown and crazy and I’m not sure if anybody remembers why, but cameras are required to surveil her wherever she goes, to keep the public up to date on her movements. At some point she married some dipshit with a soul patch who announced that he was now a rapper. I believe he debuted his song and dance on the Nickelodeon Kid’s Choice and Slime Awards, released his album, and then got a divorce. Well, there was an Entertainment Weekly issue in between there, just before the divorce, and before the memo got out that everyone was gonna hate this asshole. In this issue, they had a full page long interview with the guy, treating him as if he was an actual music artist, and not just some moron who a corporation sunk money into because he had stuck his dick in a woman that many years ago made a terrible album that somebody might still have in a box in their garage full of the stuff their kids left behind when they moved into the dorms.

It was when I turned to that page that I decided to stop getting Entertainment Weekly. And since that day life has been beautiful.

But I do like reading the ol’ magazines sometimes. Now Premiere is gone (Blades of Glory cover story, huh guys? Way to go out on a high note) and with the Fangoria horror magazine the only thing I subscribe to I’m pretty sure my mail lady’s gonna start thinking I’m a pervert. What am I gonna read on the bus when I run out of Parker novels? Maybe it’s not so wrong. Maybe we just needed some time apart, and now that we’ve had it we’ll do okay. Last week EW had a Grindhouse cover story, and I started to get tempted… 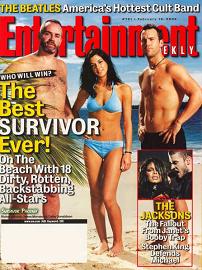 But leafing through the fucker after I’ve had some months to acquire a sense of distance, it was like putting on those sunglasses from They Live. I was always put off by their VH1-style smarminess/empty-pop-culture-nostalgia combo, but jesus. I don’t think I realized how DUMB that magazine assumes you are. The Grindhouse story is padded out from the same basic info you’ve known since before they started filming: Tarantino shows movies at his house, Rodriguez had the same double feature movie poster, you know the rest. But in case that’s too deep for you they have a side bar explaining ‘What is a B-movie?’ As if that’s not insulting enough they don’t even really define it, they just say things like if it has a long title that’s more memorable than the movie it’s a b-movie. (Yeah, but how do I know if it’s a redneck?)

Still, that wasn’t the part that forced me to write this rant. That honor goes to the accompanying list, ’20 Guilty Pleasures For Guys.’ This is a list of movies, many of which I consider classics. They got Mad Max, Dawn of the Dead, The Warriors, The Street Fighter, Dolemite, Bring Me the Head of Alfredo Garcia. They got a couple less mainstream ones too, including The Clones of Bruce Lee. The one that impressed me the most was Maniac, the sleazy William Lustig picture where Joe Spinell staples a woman’s scalp to a mannequin, handcuffs himself to it and cries, ‘I’m so happy!’ I don’t know very many people who share my appreciation for that one. They also got El Topo, which supports my theory that after the Jodorowsky box set comes out next month Holy Mountain will be a bigger and more annoying pop culture phenomenon than Napoleon Dynamite.

This would actually be a pretty good list, except for one thing: why the hell would anybody call these movies ‘guilty pleasures’? That phrase has always been a pet peeve of mine, but this is about the worst example I’ve ever seen. What kind of a weirdo feels guilty about liking Vanishing Point (#2) or Escape From New York (#1)?

Do these Entertainment Weekly writers really find themselves in situations where they say, ‘I’m so embarrassed to admit it, but I get a kick out of this old cowboy movie called A Fistful of Dollars (#4). But don’t tell anybody! I’m just crazy like that!’

I read that list and I think hey, this guy has pretty good taste in movies. And then I say wait a minute, he likes the same movies as me, but then he feels guilty about it? What is he trying to say, does he want to fight? And by the way, does he also feel guilty about adding to the world’s library of American Idol analysis every week, or does that sit well with his conscience? How did he feel about the brilliant free jazz pioneer Ornette Coleman going on the Grammies and having to give a ‘best new artist’ award to some game show contestant shoved down America’s throat by magazines like his? These people are pushing that show over the Grammies, into the Oscars. They won’t rest until an ‘Idol’ is in the Oval Office. God damn, I’m old.

No more Entertainment Weekly for me. Today I am a free man.

This entry was posted on Thursday, April 5th, 2007 at 2:00 pm and is filed under Other Sites, Vern Tells It Like It Is. You can follow any responses to this entry through the RSS 2.0 feed. You can skip to the end and leave a response. Pinging is currently not allowed.