Outlaw Vern launches a review of THE AMERICAN ASTRONAUT dvd 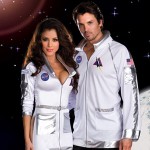 Hey folks, Harry here with a review of a pretty darn fun movie. I haven’t seen the dvd yet, that’s why it isn’t on my list. But by all means, Vern is right about the film, this is one I must pick up!

Congratulations on the robot leg, bud. I never thought of getting one of those. Sounds like a good gimmick though, hope it’s working out there.

On second thought, shit, as long as I’m writing you I might as well review this movie THE AMERICAN ASTRONAUT that I just saw on a convenient DVD type format. It officially comes out on February 22nd (or 15th if you wanna order it from the web sight). What this is is a very independent low budget absurdist comedy deal that was made in 2000 and has been touring the land ever since. You ran one glowing review of it years ago and a couple other minor references, but since it’s a real good one that will probaly get almost no advertising, I thought maybe it was worth revisiting as it comes to DVD and therefore within reach of your average citizen.

I gotta be frankly honest up front Harry, this is not a movie that is gonna appeal to most of your readers. It is a movie that has no lasers, predators or dragons whatsoever. There is space ships but they are portrayed by still paintings. I don’t remember any robots but there’s a part where a guy is sitting at a bar, the old man next to him asks, “Is it just me, or do my balls itch?” Which is not very much like a robot I guess but it was a funny line anyway. And there are more where that came from. A couple parts in this movie had me in tears, and not the HOTEL RWANDA kind. the funny kind.

I didn’t really think this was the type of movie I’d like. But a friend of mine loaned me the DVD and told me to give it a shot. I was pretty insulted because with that title, I thought it was gonna be like ARMAGEDDON part two. No offense Harry but I despise that god damn movie, it’s gotta be one of the worst Bruce Willis movies I ever seen. It’s like flipping the channels between Fox News and USA Up All Night with a strobe light attached to your nose.

Fortunately that same day I got an e-mail from my man in Australia Hugh Fleming, coincidentally recommending the same exact astronaut movie:

“It’s strange and hilarious and the guy who made it (Cory McAbee) really is an Outlaw film-maker to say the least. A genuine auteur. He did everything on this film- starred, directed, wrote the script, wrote the songs, sang the songs… never sought a proper distributor for the film because he figured they’d market it poorly and it would disappear in a week so what he did was tour the film from festival to festival, town to town (with his band as a sideshow) for the last few years so that it could develop a life and a following outside of the usual corporate sink-or-swim channels.”

Hugh went so far as to offer a moneyback guarantee if I go see the movie when it tours here. So what I got here, two people on separate continents randomly going out of their way to make me see this movie on the same damn day. So I figured for the sake of unity and understanding I would just watch the thing and get it over with. And then I could see why they were so excited about it.

There’s only one way to describe this movie, and this is it (in these words exactly, please): Imagine you rent the DVD of John Carpenter’s DARK STAR, and you happen to sit it down next to your Criterion edition of SCHIZOPOLIS. And somehow the two DVDs start to talking (bear with me here, this description requires anthropomorphicalized DVDs) and they get on the topic of the cinematography in the movie DELICATESSEN. And I mean they really start hitting it off and it’s kind of a crazy night and next thing you know one thing leads to another, which is a nice way of saying they’re screwin, right? DVD style. Next morning though things are hazy and you gotta return DARK STAR to the independent video store you rented it from. Nine months later SCHIZOPOLIS is broke and depressed, pops out this fucked up baby, THE AMERICAN ASTRONAUT. But DARK STAR is long gone. So SCHIZOPOLIS raises the kid up freaky, teaching it to be random and weird and have long awkward silences and hilarious deadpan acting. DARK STAR is not a real strong presence in this movie’s life. Every once in a while it shows up and tries to teach the kid to be a dry and dirty working class sci-fi comedy, but that doesn’t really stick. It doesn’t approve of the way SCHIZOPOLIS is raising the kid, always having big parties at the house, with bands playing loud all night, letting DEAD MAN sleep on the couch and shit. Okay, I can see his point but still, I mean, fucking DARK STAR, man. Unbelievable. What right does that fucking deadbeat have to tell SCHIZOPOLIS how to raise its movie?

Anyway that’s THE AMERICAN ASTRONAUT. People will try to explain it other ways, but that’s the correct description, thanks.

Even though it’s sort of a space adventure, and a musical, its mama SCHIZOPOLIS is the closest movie I can think of to compare it to. Because the way it unfolds, you got no idea where it’s going and it boldly goes where nobody wanted to go anyway. First there’s these solar system charts and dry narration about the history of space. Then you discover the narrator sitting in a bar on Ceres, where he announces that the story you’re about to watch is about how he became a father, and also that it is his birthday.

You probaly shouldn’t know the plot, so skip this paragraph if you know what’s good for you. The plot is very simple. It’s about a dude who trades a cat for a woman in a box, so that he can trade the woman for the only boy on Jupiter who has seen a woman’s breast, who he’s then gonna bring to the all-female planet of Venus, so he can trade him for a dead body that is worth alot of money on earth. Also the narrator cannot forgive this dude for some unknown past misdeed, so he follows him around and disintegrates everybody he comes in contact with, turning people into big piles of brown sugar. And that seems to give this pervert narrator a boner so he sings songs and rolls around in the dead people dust.

It’s real minimalistic, taking place mostly in a bar and inside the spaceship, which does not shake or appear to move, and is made to look like a very small apartment. But the movie is beautifully designed and shot, something you usually don’t get in a low budget movie like this. I mean this is a real good looking black and white movie. If it was ugly it might ruin the whole thing, but it looks gorgeous. It’s not one of those movies where you say “damn it’s so cheap but they really stretch the budget.” They don’t stretch the budget, they make it look cheap, but artful as all get out.

The entertainment value is mostly from surreal encounters, like the western dance contest that takes place at a bar early on. And when the main guy gets assaulted by song and dance while he’s sitting on the commode. I don’t know how to describe what’s so funny about this thing. But I think it has something to do with how much conviction the actors show, that they are serious about what they say and that the silly world of the movie is real. And that these are real weirdos you would meet if you were wandering through bars in space. If you’ve seen it, my favorite part is the old man’s standup comedy routine near the beginning. That guy is so perfect, and the guys in the audience. What is up with those dudes, they don’t know when to laugh. Alot of low budget movies, you can admire what they’re trying to do but they just don’t have the timing right and the actors aren’t convincing. This is one where they really got it down and they got real weird, funny dudes with interesting faces and they seem to take advantage of their natural talents (including dancing).

And you know, even though the thing is so damn ridiculous, by the end I was really involved in the story, declaring “oh shit” when something bad happened and thinking it’s a bummer if The Boy Who Actually Saw a Woman’s Breast has to get dumped off on Venus. That made for the one serious weakness of the movie though, it ends real abruptly, when I actually was caring what happened. Oh well, you can’t win ’em all. And really, what is winning, anyway? You go to the movies with the movie you have, not the movie you wish you had. etc.

Anyway this movie is finally coming to DVD and it has some pretty good extras, like an alternate angle commentary track where the director/star shows the movie to an audience at a bar and takes questions. Also some good galleries of the director’s storyboards, production designs and even detailed chalk drawings he did on sidewalks to promote the movie. In other words, yes, this is a small movie. But I guarantee you it’s a movie that will spread through the word of the mouth and will soon be considered some kind of classic.

that’s all I have to say I guess. the end. seriously though good luck with the leg.

musicals space loneliness
This entry was posted on Thursday, February 10th, 2005 at 5:55 pm and is filed under AICN, Comedy/Laffs, Reviews. You can follow any responses to this entry through the RSS 2.0 feed. You can skip to the end and leave a response. Pinging is currently not allowed.