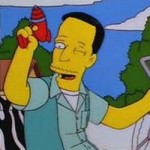 It is kind of weird seeing a John Waters picture around the same time you see one about GG Allin. John Waters if I remember correctly had a friend who dressed up like a woman and ate poodle shit. That in my opinion is pushing the envelope further than GG Allin since Allin was only eating his own shit. When it is your own shit you got a pretty good idea what’s in it, you are able to control it. With a poodle, who the fuck knows what that poodle is shitting out. I mean jesus dogs do some pretty sick shit. Like one time I saw a dog in this rat infested junkyard, well forget it this is maybe not the best tangent to go on I don’t really want to think about all this shit eating.

Well thankfully there is no shit eating in Cecil B. Demented. This is not a grossout movie. It is a movie about Art.

The story is about a young individual by the name of Sinclair, who has renamed himself Cecil B. Demented and brought together a radical group of “cinema terrorists” to kidnap the famous starlet Honey Whitlock and force her to star in their cinema verite movie… which is about her going around committing acts of cinematic terrorism. So Honey attacks a theater showing Patch Adams and quite reasonably ends up agreeing with Cecil’s radical ideas, Patty Hearst style. (Patty Hearst also has a small role in the picture, passing the torch to Honey I guess.)

I think it is great that these individuals are dedicated enough to their favorite directors that they symbolically burn the spirit of their ouvres right onto their flesh. I wonder who I would get a tattoo of. I wanna say Clint but that might confuse people since you first think of him as an actor before a director. Peckinpah is not fucking bad, in my opinion. I mean the man directed the Getaway and The Wild Bunch for crying out fucking loud. There is also something to be said for a Leone, I would definitely keep a Leone in mind.

Anyway back in the 60s there were young people who believed in things. They wanted to stop the war and get the civil rights and what not. Today there are very few political issues for young people to fight against, other than police brutality, racial profiling, domestic violence, multinational corporations exploiting people and the environment, etc. Because of this lack of direction for the generation there is only one common passion that brings them all together. cable tv.

Through the miracle of the cartoon network there are now many generations sharing the vision of the thundercats. Though this cartoon was originally designed to peddle toys to the young boys of the mid to late 80s, the miracle of cable television has allowed it to survive, where even without thundercat toys the young children can learn from the adventures of Lion-O and his sword of omens.

Children and young individuals in their twenties are more media savvy than ever. Although these young retards couldn’t tell you Jack Kerouac from Andy Capp they still have a shared love for watching movies over and over again. And that is what unites them as a generation.

Cecil B. Demented is about the individuals in the cartoon network generation who have taken their love one step further into the realm of the Artist and the connoseur. They have discovered the masters, from some german named Fassbinder to the great William Castle. They are sick and fucking tired of the older generation and the fellow cable children who are happy to settle for less. And they’re not gonna take it no more. I gotta tell ya man it is a beautiful sight to see the youngsters finally fighting for what’s right. This is a war worth fighting, the one against Patch Adams.

This picture takes everything we believe about the importance of the Cinematic artform and takes it too far. These are individuals who are willing to die or set themselves on fire to make a movie. They are shot at by police and teamsters and perform dangerous stunts and abandon their families and even remain abstinent, all in the name of Outlaw Cinema. Hell, I don’t know if I would go that far but I’m really fucking glad there are people who would. I am very excited about this new movement which I feel is less pretentious and has more potential than Dogme 95. Hopefully a new generation of filmmakers will use Cecil as their symbol to destroy the memory of Patch Adams forever and retake the screens.

John Waters Maggie Melanie Griffith Stephen Dorff
This entry was posted on Wednesday, August 30th, 2000 at 4:37 am and is filed under Comedy/Laffs, Reviews. You can follow any responses to this entry through the RSS 2.0 feed. You can skip to the end and leave a response. Pinging is currently not allowed.