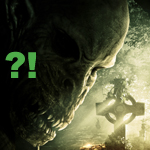 Let’s be realistic. This is the LEPRECHAUN series. You and I, we are not devastated or surprised that the new LEPRECHAUN movie is not good. We weren’t expecting it to be, we weren’t even wanting it to be. But one thing we did expect, in my opinion, was it to be a movie that had a leprechaun in it. When you really think about it, that is one of the number one things tying all the previous movies together. “Has a leprechaun in it” has always been one of the steadfast rules of the franchise. Until now.
END_OF_DOCUMENT_TOKEN_TO_BE_REPLACED