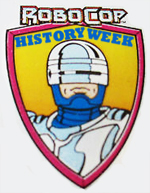 But I thought it would be helpful for all our mental and emotional health to remember that it’s not exactly an untouched story suddenly being violently plucked from a pure white cloud and soiled by unexpected commercialism. We’ve never lived in a world where ROBOCOP was safeguarded from exploitation like a J.D. Salinger book or Calvin and Hobbes. No, as soon as the damn thing was out of the gate it was cross-marketed like an Omni Consumer Product. It was merchandised, sequelized, video gamed, cartooned and teeveed. Of course I’m not saying “it’s already been ruined, so let’s keep ruining it.” I just mean that since they’ve already treated it like a trademark, brand, franchise and property even before everybody was brainwashed into using those OCP type terms non-ironically, I’m open to the idea of somebody coming along and doing a better job of it. END_OF_DOCUMENT_TOKEN_TO_BE_REPLACED