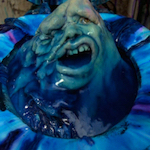 I was thinking about STREET TRASH (1987) after I revisited the TOXIC AVENGER series a couple months back. I had seen the movie as a teen and all I really remembered was a part where some dude is taking a piss and his dick gets ripped off and a bunch of guys play keep away with it. Of course, any movie would be proud to have a memorable scene like that, and most filmmakers would tip their hat to it, just out of professionalism. But it is widely known that TOXIC AVENGER director Lloyd Kaufman hates STREET TRASH and the people behind it. I heard him grumble about it at a book signing, and he refers to it sometimes in his books, without really going into specifics. People ask him about it in interviews, but he’ll just make a joke. The best explanation seems to be that he thinks it’s a rip off of the Troma style. Also, there was apparently some incident involving its “little shit” director Jim Muro on an episode of The Morton Downey, Jr. Show.

It definitely traffics in a similar in-your-face repulsiveness/taboo-violating to the Troma movies. It takes place among a community of homeless alcoholics in Brooklyn and uncomfortably blurs the line between offensive caricature and (very mildly) sympathetic portrayal. I can’t think of a character in the movie that’s not intentionally repellent, but the movie at least recognizes that they’re up against a cruel and unjust world. END_OF_DOCUMENT_TOKEN_TO_BE_REPLACED