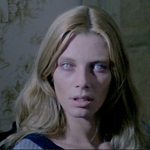 Liza (Catriona MacColl, HAWK THE SLAYER, AFRAID OF THE DARK) is a New York fashion designer (with British accent) who inherits a small inn in Louisiana. It’s been closed for a long time and the basement is flooded, but she wants to get it running again. One important piece of information that has been kept from her: a dude was crucified in the basement in 1927 and renovating the place will open one of the Seven Doors of Death. And you know that song “Who Let the Dogs Out?”, well it will be exactly like that but even more horrifying because it will be who let the dead out to wander the earth and eat people’s faces off and crazy shit. I’m against it. END_OF_DOCUMENT_TOKEN_TO_BE_REPLACED