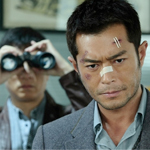 In the opening scene the squad catches a bus full of drug mules on a toll bridge. They bring them to the hospital and proceed with the unglamorous work of making them shit out the “drug pods” into bowls before they burst inside them and kill them horribly. I’m looking for a HOLY MOUNTAIN Alchemist/shitting in a bowl joke here, but maybe I’ll just let the moment pass. I am nothing if not classy as all fuck. END_OF_DOCUMENT_TOKEN_TO_BE_REPLACED