Four Sheets to the Wind 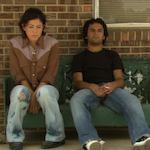 I can’t keep up with as many TV shows as some people do these days, but I have a few, and right now the one I love the most is Reservation Dogs. It’s on FX (and streaming on Hulu) and so far there are only 2 seasons totaling 18 half hour episodes, so it wouldn’t be that hard to catch up on. It centers on a group of teenagers who live on a reservation in Oklahoma, though sometimes it veers off to be more about their elders. It reminds me of my other favorite show, Atlanta, in that it has this A+ ensemble of core characters surrounding straight woman Elora (Devery Jacobs) who are each so hilarious in their own way that whenever it focuses on one of them I start to think that’s my favorite character. They have their funny shit they obsess over and their ways of saying things but maybe the funniest stuff is just their expressions seeing and listening to all the ridiculous things they encounter. (And the truth is my favorite is Willie Jack, played by Paulina Alexis.)

It’s also a really heartfelt and emotional show about friendship while going through shit, so it’s definitely made me cry more than any other show this funny, or maybe any other show. I don’t usually cry at TV shows, but this one gets me, in more ways than one. It’s proof of concept for the power of representation, because it’s reportedly the first ever TV show with all indigenous directors and writers, and it’s about Native life and tradition, and Oklahoma, none of which aligns with my experiences at all. And yet the specificity makes it real, and the problems they’re dealing with are universal. END_OF_DOCUMENT_TOKEN_TO_BE_REPLACED