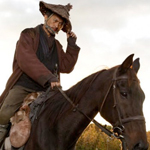 I think this is the type of remake that’s a sign of respect, not exploitation of an existing title. It’s saying “we all know this great movie UNFORGIVEN, I mean what kind of assholes do you take us for, but here is another take on it for you to enjoy a bit before returning to the original.” Even in that case the impossible part about remaking a Clint Eastwood movie has got to be finding a guy to replace Clint Eastwood. I gotta say, Ken Watanabe was a brilliant choice. He has a stoicism and masculine presence that’s reminiscent of Clint, he kinda looks like him on the poster, and he even knows the guy well as the lead in Eastwood’s underrecognized-even-while-nominated-for-best-picture directorial work LETTERS FROM IWO JIMA. But his character Jubei is not just an imitation of Clint’s William Munny. He’s a little less gruff, and even more internal. He talks a little less I think, even skipping a perfect spot to fit in the famous line “Deserve’s got nothin to do with it.” I guess he figures it goes without saying. END_OF_DOCUMENT_TOKEN_TO_BE_REPLACED