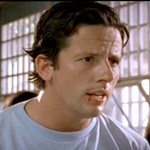 Ross McCall (SUBMERGED) triumphantly returns to his role of Dave, he was the guy who was the airline pilot, he called them up and warned them there were a bunch of guys that were gonna beat them up at the game or whatever. I don’t remember him being that important of a figure but prison is one of those small ponds that makes his fish parts look bigger or whatever. It’s just him and two oafs we never saw before from the GSE (Green Street Enthusiastic Soccer Fans Club dot org) and all the sudden he’s the brains of the operation, he acts like the leader and they follow him around and stuff. McCall is good actually, I had to look him up to make sure he was in the first one because he has a much stronger presence here, he seems like a different guy. END_OF_DOCUMENT_TOKEN_TO_BE_REPLACED