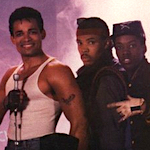 I must’ve known the word “rap” in ’85 – as in “a rap,” because everyone knew about “The Super Bowl Shuffle,” and I was obsessed with the Grandmaster Melle Mel song “Vice” from the Miami Vice soundtrack. But I also called it “breakdancing music.” I was learning. It might be for the best that I didn’t learn from RAPPIN’, a movie I didn’t know about back then even though it was from the same studio and director as BREAKIN’, and supposedly released as BREAKDANCE 3: ELECTRIC BOOGALEE somewhere, though I haven’t been able to find any advertising art to support that claim. END_OF_DOCUMENT_TOKEN_TO_BE_REPLACED