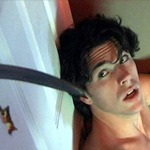 At night he goes to a Halloween carnival with some friends, where you have your typical slasher movie debauchery (except gay) while the devil mask guy follows them around looking for a window to behead them. END_OF_DOCUMENT_TOKEN_TO_BE_REPLACED